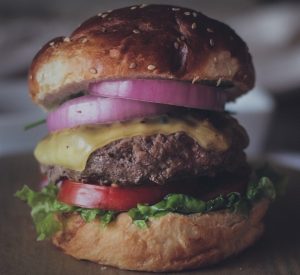 BUILDING TRUST, ONE BURGER AT A TIME

At Court Appointed Special Advocates of Santa Barbara County, the largest group of children in need of an advocate is teenage boys. When Steve Pinsker became a CASA, he knew without a doubt that was where he could offer the most help.

“I was a teenage boy for many, many years; way beyond my 20th birthday,” chuckled Steve. “Although I had a very normal childhood, on some level I can relate to the boys fairly quickly. I think it may be because I played a lot of sports growing up in a very diverse town. ”

For more than four years, Steve, 70, has served as an advocate, mentor and friend to four CASA youths. He began his CASA journey with two teenage boys, one living in a foster home and the other in a group home. Although the boys’ personalities and circumstances were very different, Steve’s approach to get to know them was the same.

“You build their trust over time,” explained Steve. “They’re just kids and some of them have much thicker skin than others. They’ve all had different experiences of abuse, neglect and/or abandonment to one degree or another. In the end you want them to think of you as a slightly weird uncle.”

How did Steve get these boys to open up? He took them out to eat.

“At first, we went to a movie, but there’s no interaction or discussion, only entertainment, which is good but not necessarily the best use of limited time considering they have school and most also have part time jobs, so you have to make the most of your time,” said Steve. “Since they’re teenage boys they’re always hungry. After a while, sitting across the table from each other, you and the kid will start talking; burgers always work.”

These meals did more than simply fill their bellies. Going out to eat with their CASA became a weekly ritual that the boys could count on no matter what else happened in their often unpredictable lives.

“I found it best to have a set schedule,” says Steve. “For instance, I’ll have Monday dinner with one kid and Thursday lunch with another as consistently as possible.”

The consistency and frequency of these visits helped set the foundation for what would become trusting and lasting friendships between Steve and the boys, even after their CASA cases had ended.

“One of my guys is a freshman at UC Santa Cruz with a full scholarship in its computer science program. I still see him when he’s home on vacations.” Steve said. “Another of my boys worked here in town after graduating from San Marcos High and has saved up enough money to take a trip to Europe. We still have lunch about twice a month.”

Born and raised on the New Jersey shore, Steve has lived in Santa Barbara since 1978. A bankruptcy and business litigation attorney, Steve retired from his law practice and a law-teaching career to focus on volunteer work.  He decided to look into the CASA program after learning about it from a friend.

“This program struck a chord. I took the training and I’ve been a CASA now for more than four years,” said Steve. “I can’t think of anything more worthwhile than to devote your time and energy to helping these foster kids. That’s the reason I become a CASA.”

Steve speaks about his CASA role with an earnestness that makes his commitment to these boys very clear: he is there to help build the foundation for a brighter future and to ensure the best possible outcome for each of them.

He recounts the story of one of his most recent CASA youths, Luke, who recently enrolled in Santa Barbara City College to become a therapist so he can help kids like himself in the future.

“He studies hard and he does his homework every night; I am sure that he will succeed,” said Steve with admiration. “I see him weekly. His social worker was recently able to get him permanent residency and a green card. It’s a really good story. He’s a great kid.”

This story is worlds away from the life Luke was living a few years ago. When he was in third grade, his father pulled him out of school to work for a traveling amusement ride in Mexico. When Luis was 14, his mother brought him to Lompoc and enrolled him in school. By then, Luke hadn’t stepped foot in a classroom in six years and didn’t speak much English. A year later, his mother dropped him off at the home of some family friends and didn’t return. The family took him in as one of their own and Luke now refers to them as his “second family”.

Steve says he’s learned a lot from his CASA experience, most notably the extraordinary resilience of his CASA kids.

“It’s amazing that they were able to go through what they’ve been through and are not mad or bitter. They’re a little lost perhaps, but you try to solve that,” said Steve. “They’re just good, resilient and deep down really wonderful kids.”