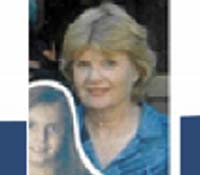 Before I started the CASA of Santa Barbara program with Barbara Margerum, I was an instant foster parent for an abandoned 5-week old baby.  This opened my home to other foster children, and I learned how great the need was.  I met a 5-year-old girl whose foster mother neglected the hole in her tooth that caused her such pain.  I learned one foster girl was sent out of the county where her birth mother had no way to visit her.  I found a young boy who spoke only Spanish in a foster home where no Spanish was spoken.
I kept asking why no one had started a CASA program and found a few who had tried years before and failed.  One was Barbara Margerum, a lifelong child advocate.  We called a meeting, I think there were six of us.  I took the CASA training in 1990 in Ventura, and while I served my first cases, our small group recruited board members, convinced the juvenile court judge and found an umbrella agency. And I became the first CASA Executive Director in Santa Barbara County.  My proudest moment was how I, as a quiet, shy housewife, took the helm and made it happen.  I was thrilled to tears when we graduated our first class of 12 eager advocates in 1992, and when we became independent in 1995 with our own 501(c)3.  I recruited, screened, trained, and supervised volunteers, wrote court reports and grant proposals, went to juvenile court every Thursday, and met with my then board members. Eventually we had a part-time secretary and volunteer case managers, and then an Assistant Director based in Lompoc. Together we all learned how best to serve the needs of the children and the foster care system.  One child at a time.  Every child in the system deserves to have a voice in court, a family who loves and cares for him or her, and a stable home.  Strong advocacy can make this happen.  I am so proud that CASA has continued to succeed in our community and that so many children have been helped and so many volunteers have been placed in a position to serve others and been rewarded by their experience.