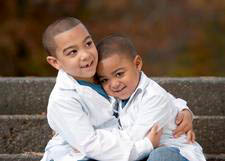 When I first met him, he was clutching a photo of himself with his brother.  I could tell that the photo was very important to him.  Victor seemed scared and wouldn’t look me in the eye.

I am a CASA volunteer.  I am for the Child.

I am Victor’s champion. I am his confidant.  I have the unique authority to speak to the court on his behalf.  I bear the responsibility to protect his unalienable rights to be safe, to be treated with dignity, and to live with a family who loves him.

When Victor and Carlos’s mother brought them to Santa Barbara County four years ago, she probably hoped for a fresh start in life for herself and her sons. Unfortunately, her troubles with mental illness and methamphetamines got in the way. Her addiction kept her from caring for herself or her boys.

Moving from place to place, the boys and their mother lived in shelters and motels, and Victor and Carlos had to keep their belongings in a black plastic trash bag, never knowing when they would be moving again. Sometimes they stayed with a new “dad” for a while.  It was during one of those times that the mark appeared on Victor’s face.

Although the boys were never at one school for long, it was a teacher who first alerted Child Welfare Services (CWS) about the signs of abuse and severe neglect she witnessed. Both boys were small for their ages, and seemed to bathe only rarely. Classmates bullied Victor and Carlos when they noticed the smell and their tattered, too-small clothing. Carlos’s teachers often caught him searching through trash cans for food to feed himself and his brother. The mark on Victor’s face was the last straw.

Victor and Carlos were placed in separate foster homes.  Their mother died of a drug overdose soon after.

In foster care, Victor’s basic needs were being met. He began doing better at school, and his clothes were neat and clean.  But I knew his emotional well-being still hung in the balance, so that was what I was prepared to submit in my court report.  I asked Victor if he had any messages that I could tell the judge on his behalf.

“Tell the judge I said hi.”

“Tell the judge I want my mom back.”

“Tell the judge I miss my big brother and I want to live with him.”

We can’t fix everything.  We could not bring Victor’s mom back.  But we were able to find a home that wanted to adopt Victor and Carlos, so that they would spend the rest of their childhood together in a forever home.

I am for the child. I am a CASA volunteer.