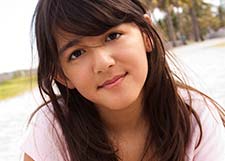 Shannon was five when she was matched with her advocate Marissa.  She had been brutally abused, and had no healthy parental figure, which resulted in her use of foul language, tantrums (including while she was with her advocate), and physical aggression.  She was expelled from kindergarten for knocking over the principal who had leaned down to talk to her.

Her advocate, who knew that she was very bright, visited multiple schools in an attempt to find the perfect teacher to deal with Shannon – someone who could see past the behaviors to her amazing potential.  Marissa also helped find a single woman who was willing to adopt Shannon even with all the challenges she presented.  The advocate continued to work with Shannon and support her to ensure the adoption was successful. Shannon could have been relegated to moving from school to school, foster home to foster home, from therapist to therapist, but Marissa would not permit that to happen to this girl with amazing potential, despite her out-of-control behavior.

Shannon is now a happy 12-year-old and remains in her adoptive home, due to the faith and tireless efforts of her advocate.