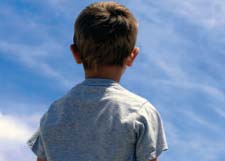 Manuel was just 3 years old when he was abandoned by his mother and placed in a foster home. Manuel showed signs of severe neglect and physical abuse: he had scars on his body, was not toilet trained, and his speech was extremely limited.

His attorney immediately recommended that a Court Appointed Special Advocate (CASA) be assigned to Manuel’s case, knowing that a CASA would be able to provide individual advocacy to Manuel to ensure his urgent needs were met and that he would receive the time and attention he needed to heal physically and emotionally.

On the outside, Manuel was an adorable, friendly child, but his history of abuse had caused serious damage to his inner, emotional health. When he became frustrated, Manuel would act violently. This challenging behavior proved difficult for foster
parents, so within seven months Manuel was moved three times.

Manuel’s CASA saw that the changes aggravated Manuel’s emotional trauma so she worked to keep him from being moved again. She advocated for intensive therapy and special education as well as training for the foster parents in order to stabilize Manuel in their home and in school.

For the CASA, these improvements were not enough. Believing that Manuel needed a forever home, she continued to make inquiries about a permanent adoptive home, and when a young couple became interested in adopting Manuel, his CASA spoke to them weekly, keeping them up-to-date on Manuel’s progress in school and at home.

When Manuel was set to meet his adoptive parents for the first time, his CASA was with him. In fact, she helped him throughout the transition to a new home and continued to see him weekly until the adoption was finalized.

On a recent visit, his CASA was treated to a tour of his home. He told her, “This is my home now, and this is my own room. What I like here is that I have a mom and a dad who love me. They help me with my homework, and my dad even taught me how to fish!”