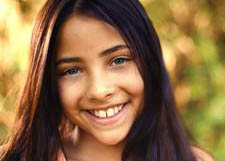 Jessica told the Police that she was fearful to return to her grandmother’s home because she was afraid her grandmother would return her to her mother.  Jessica was immediately removed and placed in foster care.

Jessica, a very bright outgoing child, was exposed to more of the adult world than any eleven year old should ever know.  However, she remained very much a young girl enjoying dolls, kitty cats and computer games.  Her schoolwork was average and her teachers and counselors expressed concern about her constant need for attention.

The CASA volunteer assigned to Jessica’s case visited with her every week. She took on a very complex situation and worked diligently to communicate Jessica’s best interests to the Judge and other parties on the case.  The CASA volunteer met with Jessica’s teachers, family, therapists and Social workers to continually monitor her progress and safety.  At her last visit to the foster home, the CASA reported that it was a loving, nurturing home – a dream visit that any CASA advocate would love to experience.

The CASA volunteer was extremely pleased with the placement; Jessica seemed so happy, and the foster parents were loving, kind, and committed.  A few months later, Jessica was adopted by her foster parents and her case was closed.

Help us make sure children like Jessica have a CASA volunteer by their side. Don’t let them go through it alone, volunteer today.