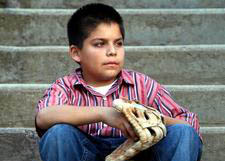 9-year-old Bobby was discovered begging for food in a local city. He had been living in a car with his sister and drug-addicted mother after moving from motel to motel. Bobby had attended school sporadically throughout his life, was virtually fatherless since birth, and had been surrounded by drug abuse and prostitution for years.

After being removed from his mother’s care and placed in a foster care home with five other children, Bobby was paired with a Court Appointed Special Advocate.

Due to his transient past, Bobby had serious educational and social needs as he had difficulty making friends and participating in group activities, and was quite behind in school.

Bobby’s CASA volunteer was able to provide an immediate stable relationship and become a friend during this difficult time. She got very involved with his educational needs, has made arrangements for an after school tutor, and has arranged art lessons for Bobby’s enjoyment and self-esteem.

For the first time in his life, Bobby just completed an entire year of school…successfully. With the help of his CASA Volunteer, Bobby is now performing at grade level and his teacher reports that he is a very bright child – only needing the right support to reach his full potential.

Donate today to help create a success story for more children like Bobby.