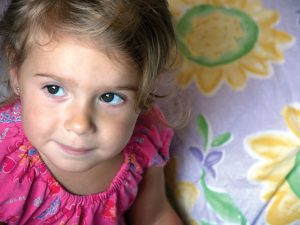 The deck was stacked against Angela from the day she was born. Her mother died of a drug overdose weeks after giving birth. No one knew who her father was. And prenatal exposure to drugs left Angela suffering from severe asthma, residual shakes, and crying spells.

But Angela had one advantage many foster children can’t count on – a Court Appointed Special Advocate committed to ensuring her safe journey to a stable and loving home. Angela’s advocate visited her every week at her foster home, reporting to the court on her incredible progress. The volunteer spent time with Angela to make sure that she continued to reach her developmental milestones. With the support of a CASA volunteer, Angela was finally free to thrive.

The CASA volunteer worked diligently with the social workers to advocate for the best situation for Angela. Research was conducted on relatives who’d asked the court for custody, but with a long history of drug use, incarceration, and involvement with the child welfare system, none of them could provide a safe and stable home.

Thanks to the intervention of her CASA, the cycle of violence that has trapped Angela’s family for generations has been broken. Today Angela is happy, healthy and celebrating her 3rd birthday with her loving adopted family. Angela’s CASA checks up on her periodically and is always pleased to see just how much Angela is growing up.

Are you able to help children just like Angela? We will give you the tools, training, and continuous support to make sure children like Angela get a second chance. Join our team today.