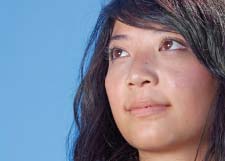 Amelia is a young lady who never really had the chance to be a child. It’s difficult to say that she was removed from her home, since Amelia and her younger sister never had a place to call home in the first place. When she entered foster care, Amelia was a 12-year-old who had endured a lifetime of abuse and instability. With each of her mother’s new boyfriends came a move to a new home, each progressively worse than the previous, all riddled with the nightmare of domestic violence and substance abuse.

Amelia told her volunteer Court Appointed Special Advocate (CASA) that with each move her mother would promise a new beginning. Unfortunately, each was just another chapter in her mother’s book of alcoholism and mental illness. Amelia thought she was the cause of the fighting, and tried her best to always be good, but she never could really be “good enough”.

As time went on, Amelia became the caretaker of her baby sister and the target of the boyfriend’s rage. Finally, a neighbor called to report concern for the children during another loud and angry argument. When the police responded to her home, they found a desperate Amelia hiding with her sister under a filthy trailer as her mother ranted around the yard in psychiatric despair. Amelia did not cry as she was taken away to live in a home with strangers—until she was separated from her little sister.

Amelia was bright and insightful beyond her years, but she bore the scars of her past. She was distant and distrustful of everyone. Amelia told her CASA volunteer that while she knew she was safe in foster care, she didn’t like living with people who really didn’t know or care about her. Slowly, Amelia began to look forward to her CASA’s visits, which were the first consistent thing in Amelia’s life. Her CASA was interested in Amelia; they went places together, they talked about school, friends, and plans for the future. Her CASA took Amelia to court and told the judge about how she felt about her mother, about living in a foster home that was not right for her, how much she missed her little sister, and about her plans to go to college. Amelia told her CASA that she was the first person to ever really get to know her. Amelia’s Court Appointed Special Advocate was able to fight to change Amelia’s life. Her CASA worked with Social Services to find the right family for Amelia.

Now Amelia has a family who is not only committed to her, but to maintaining her connection with her sister. Amelia is in high school now, and continues to plan for college. She and her CASA meet every week— and it’s a visit Amelia looks forward to, because they are connected. Amelia is now 15 years old with a bright future ahead of her—one that would not have been possible without a CASA Volunteer.