Lompoc Veteran Retires After Seven Years of Service for CASA 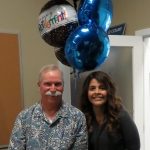 Seven years is a long time. It is an especially long time for volunteer work, which requires an abundance of commitment, dedication and skills that does not always guarantee a reward. But Lompoc resident Don Stephens, who officially retired as a CASA on Tuesday, August 23, has been gifted many times throughout his duration as a Court Appointed Special Advocate for Santa Barbara County, where he represented six local children in Juvenile Court.

As a veteran of the U.S. Army, Stephens has been familiar with difficult times. Stephens served from 1970 to ’73 and was stationed in Korea during the Vietnam War. But, as his strong desire to help fellow American citizens carried over into his civilian life, Stephens joined CASA in 2009 and began experiencing a different type of suffering.

Over the years, Stephens has worked on several individual and sibling cases, including some which involved substance abuse, domestic violence and severe neglect.

Stephens bonded with the children through sports like basketball, outdoor activities such as hiking, and hobbies like fishing, giving them a patient, caring adult to look up to. One of CASA’s favorite stories involving Don is that of Tommy, a six-year-old boy who had spent most of his life in homeless shelters. Eventually, the shelters became foster homes when abuse became blatant, and Don became Tommy’s CASA. He bonded with Tommy through fishing, which showed the young boy that it was possible to develop trust and consistency with an adult.

“Don was an awesome volunteer,” said Senior Advocate Supervisor Coco Landeros-Rico. “He was kind, caring and dedicated to his kids. It was a pleasure to work with him for the last seven years.”

Stephens has undertaken some of the most challenging cases and inspired many to never lose hope or give up on a child, according to CASA staff.

“Here at CASA of Santa Barbara County, we salute our veterans who serve today as CASA volunteers by giving a voice to abused and/or neglected children,” said Executive Director Kim Colby Davis. “Don will be missed dearly, but the work that he has done for the community is everlasting.”

All in all, Stephens’ explained his experiences with the nonprofit organization have been similar to his time in the military.

“What is similar is the camaraderie between CASAs and between soldiers,” Stephens explained. “We all worked towards the same goal.”

CASA of Santa Barbara County is currently serving around 300 children with the goal of at least 500 before the year’s end. In 2015, the organization nearly met their goal, serving 487. There are currently more than 50 children on the wait list, and two upcoming volunteer training opportunities in Lompoc and Santa Maria.