Go beyond your scope of work and capabilities. Be the best that you can be!

“Go beyond your scope of work and capabilities. Be the best that you can be!”

These wise words were spoken by a CASA volunteer to her 18 year old CASA youth, Anthony. The two met when Anthony was 16 and having a difficult time. She assured him that he was capable of creating a life greater than the tragedy he’d experienced as a child. “It was a lot of meeting him where he was at,” says his CASA. With the support of his advocate, she positively influenced Anthony and motivated him to do more with his time. She challenged him to think about his long term future. Together, they set some really good life goals.

She helped him stay out of gangs and trouble during high school, encouraged him to graduate high school, and find a job. Two years later he is now a non-minor dependent, but needs the extra support from his CASA and the system. Last year he graduated high school with a 3.0 GPA, and now works at a grocery store while attending Allan Hancock College. Anthony remembers his CASA’s words of wisdom and really took it to heart. Just recently he offered to work during the holidays so others can have the day off. Because of his work ethic, Anthony’s employer offered him a raise. What a proud moment for his CASA! “He is growing up to be a very productive and successful young man,” she gushes. 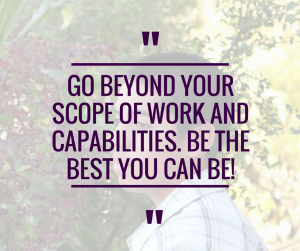 Anthony, like all the other children and youth in foster care, is just one caring adult away from being a success story. Are you ready to be the one who can make a difference? Click the link to see what it takes to become a CASA volunteer.