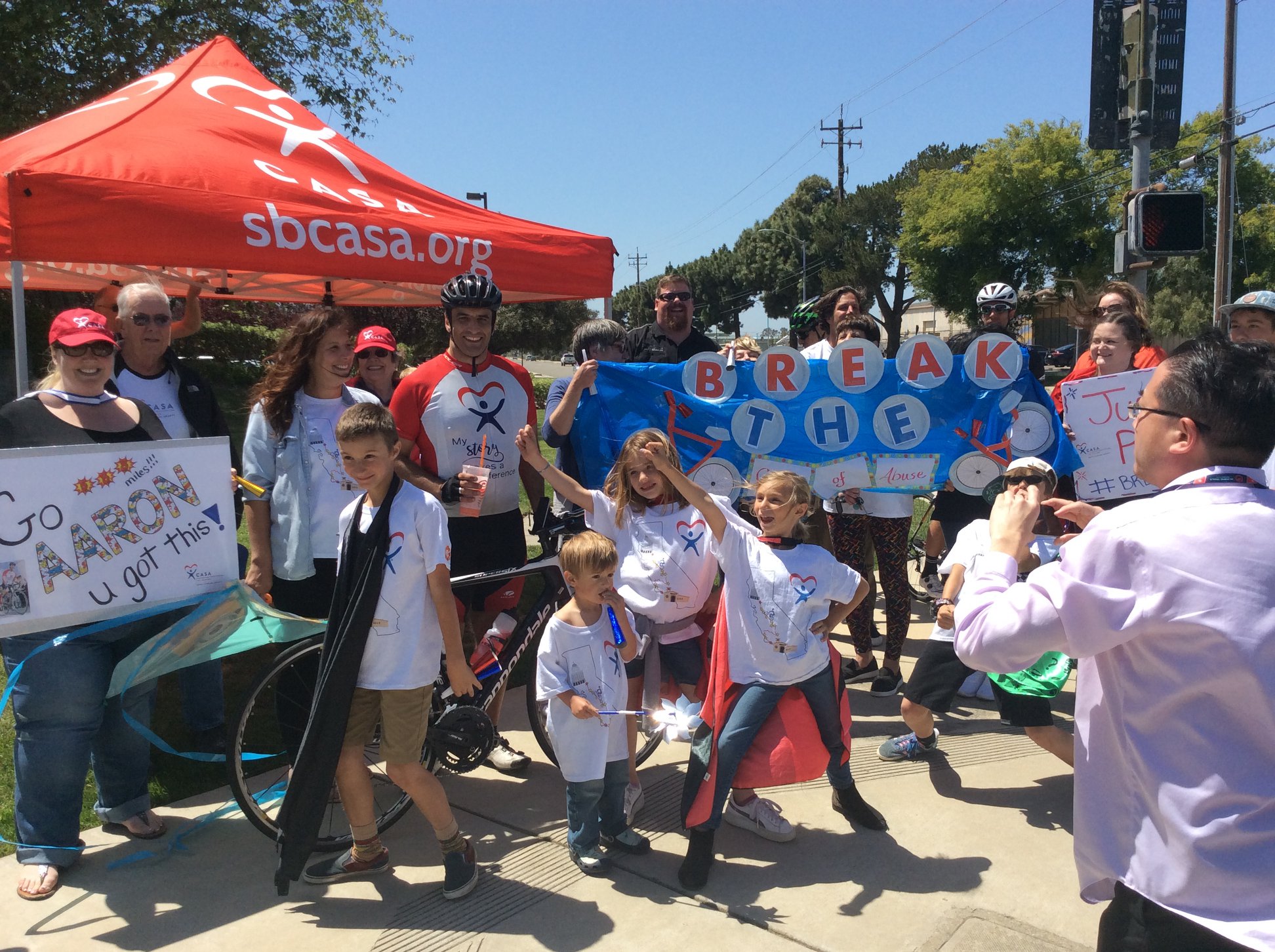 To help raise awareness for Child Abuse Prevention Month and to address the need for more advocates for children across the county, Aaron Pankratz began a four-day bike ride from Santa Barbara to Sacramento on Friday morning.

He reached Buellton at noon and just before 2 p.m. reached the CASA headquarters in Santa Maria, much to the delight of a huge team of fellow CASA colleagues, friends and family members.

“The reason I’m riding today is because in our community, there are so many kids facing challenges that I’m physically and metaphorically facing [during this trip],” Pankratz said. “These children often have to face the uphills and headwinds of life they [encounter] in foster care.”

Pankratz only had a few minutes in Santa Maria to re-energize and have a smoothie before taking off to make it to the CASA headquarters in San Luis Obispo by 4 p.m. and, then, to Jamba Juice in Paso Robles by 6 p.m.

The goal en route to Sacramento is to stop at CASA offices throughout the state.

For the next few days, Pankratz hopes his journey will draw attention to volunteers coming to the need of so many children in order to remind them that they don’t have to face their challenges on their own. He also hopes his ride will inspire others in the area to become volunteers.

Pankratz didn’t ride alone the majority of Friday; he had his brother Dave Pankratz bike alongside him to Paso Robles.

“I’m stoked to be a part of Aaron’s vision for breaking the cycle of child abuse,” Dave said. “I rode with him during his bike ride last year, which was slightly shorter than this year’s ride. This year’s a bit more challenging because we’re biking longer, and it’s really windy”

After Friday, Pankratz will trek alone to Sacramento, which he hopes to reach by 4 p.m. Monday.

“CASA volunteers experience many hills and hurdles while working on a child’s case,” Pankratz said. “While their hills are more metaphorical, mine will be literal. They help transform the lives of children who have experienced abuse or neglect, and they give children hope.”

CASA of Santa Barbara County’s executive director, Kim Colby Davis, echoes Pankratz’s sentiments of hoping to bring more awareness to the needs of abused or neglected children, not just in Santa Maria but all over the state.

“Aaron had this crazy idea to do this bike ride last year, and this year he decided he needed to expand his route,” Davis explained. “I think it’s just such an amazing commitment.”

The bike ride also offers an opportunity for fundraising with a goal of $25,000, which would help sponsor 10 additional children in Santa Maria for a year. The money would cover costs for recruiting, training and volunteering to serve the children.

“The real important thing about this entire bike ride is to remind the community that we can all come together and make sure that all children who experienced abuse or neglect have the advantage of having a CASA volunteer by their side,” Davis said.

“We really hope more volunteers from Santa Maria will see that need and want to be a part of it.”

For more information on CASA, and to follow Pankratz on his journey to the Capitol, visit Facebook.com/SBCASA or www.sbcasa.org/breakthecycle to donate.